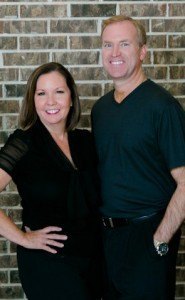 Dr. Cody and Dr. Cashion met in dental school in 1988 and were married in 1992. They have two children, Erin and Neal.

Their marriage is a prime example of the phrase “never say never,” as Dr. Cashion, who is a born and bred Texas Aggie, swore growing up he would never marry a Texas Longhorn. Well, as fate would have it, Dr. Cody is a Texas Longhorn.

Dr. Cashion first considered dentistry in elementary school. He remembers being teased for having spaces or gaps between his teeth. He knows what it is like to always be self-conscious about your smile and the lack of confidence that can bring. He asked his orthodontist about braces but the orthodontist told Tim his bite was fine and that he should talk to his dentist about a new procedure being done called bonding (this was the early 80’s). That decision changed his life. He had cosmetic bonding done to close the spaces and make a fuller smile. He remembers the freedom it brought to not have to cover his teeth every time he smiled. That one dental appointment cemented his decision to pursue dentistry as a career.

Dr. Cody never thought she’d end up a dentist! Her childhood dentist did not believe in anesthetic. Ouch! That left her petrified and she freely admits she was probably one of the worst patients because of her fear. It wasn’t until she was in college that she went to a wonderful dentist and discovered dental visits could be pain-free, even pleasant. Maybe that is why she is obsessed with finding new and better ways to make dentistry comfortable and pain-free: like TVs to keep you entertained during procedures and new anesthetic that is liquid and squirted under the gum for regular and deep cleanings – no shot necessary. Dr. Cody has the topical cream to numb the gums, specially formulated and made at the compounding pharmacist. She couldn’t find anything on the market that worked well enough. In addition, all the high tech equipment makes every job easier.

Dr. Cody’s special interest is orthodontics. Erin, their daughter, needed braces due to severely overcrowded teeth. Most orthodontists she talked to wanted to pull some of Erin’s teeth. Having that done herself when she was a teenager, she knew there had to be a better way. Dr. Cody decided there and then if she couldn’t have her daughter treated the way she wanted, she would do it herself. Thus began the new passion of her career! After hundreds of hours of orthodontic training, she established a goal of non-extraction braces whenever possible. Erin has a gorgeous smile! It was well worth the study and dedication.

As an adjunct to their busy general family practice, the doctors have a special interest in treating special needs children. Their son, Neal, has Down syndrome and they know the difficulties parents can face getting dental treatment. The doctors have a thorough knowledge of the anatomy and physiology of the special needs child. Often there is severe crowding, no room for the tongue (resulting in subsequent speech problems) and deep palates. Their goal is to develop the jaws to the proper size, align the teeth, and make room for the tongue, which improves breathing. Thus, not only is form improved (appearance), but also function.

This extra knowledge benefits patients but also provides tremendous satisfaction for the doctors. It is with compassion and gratitude that Dr. Cashion and Dr. Cody serve their patients. Giving the best care for everyone is what it is all about.

Dr. Cashion and Dr. Cody have started a non-profit 501c3 called Changing Minds Foundation to support further research and treatment of individuals with Down syndrome. To see the activities, visit www.changingmindsfoundation.org.